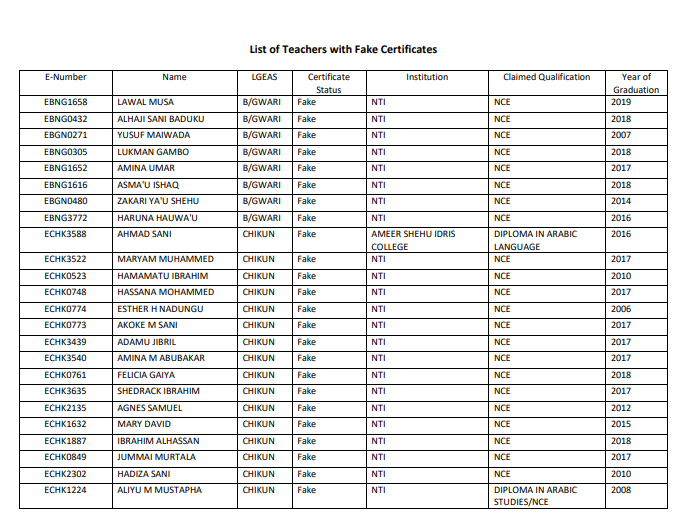 Governor Nasir El-Rufai-led government of Kaduna State has released the names of the 233 primary school teachers sacked over certificate forgery.

Naija News reported that the Kaduna government had announced the dismissal of the teachers for presenting fake certificates.

Speaking with reporters in Kaduna on Thursday, Chairman of the State Universal Basic Education Board (SUBEB), Tijjani Abdullahi, had said that the sacked teachers would be made to face the full weight of the law.

Abdullahi maintained that there was no going back in the conduct of competency tests for public school teachers in the state.

He added that as part of the board’s transparency, the names of the 233 teachers with fake certificates would be uploaded on the state government’s website.

Backing up his words with actions, Abdullahi on Friday released the names and some other details of the sacked teachers on the government’s website.

A quick check by our correspondent reveals that the board released the names of the culprits, local governments, certificate status, claimed institution, alleged qualification and year of graduation.

Recall that the Kaduna government sacked the teachers after a verification exercise was carried out on 451 certificates to ascertain their authenticity and to ensure the teachers meet certain requirements.

According to the Chairman of SUBEB in the state, the board had commenced verification exercises in April and discovered that 233 certificates were fake.

He stated that the board had so far verified 451 certificates from 13 institutions, saying that nine of them had responded.

The SUBEB chairman revealed that one institution disowned 212 of the 233 certificates.