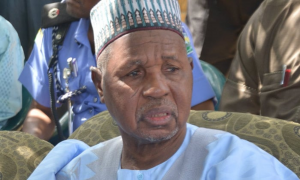 Katsina State Governor, Aminu Masari has cried out that the abdicated responsibilities of the Federal Government transferred to the state government are becoming unbearable on states.

Masari expressed worry when the new commandant of the National Drug Law Enforcement Agency (NDLEA) in the state, Muhammed Ibrahim, paid him a courtesy call at the government house on Thursday.

The visit was reportedly to intimate him of the command’s planned activities and to seek his continued support for the narcotic agency.

Masari stated that he cannot understand why federal agencies keep depending on the state government for vital logistics to carry out their responsibilities in states.

Masari, however, pledged that the state will continually provide the necessary support within the limits of the state resources to assist the command in carrying out its assignment in the state.