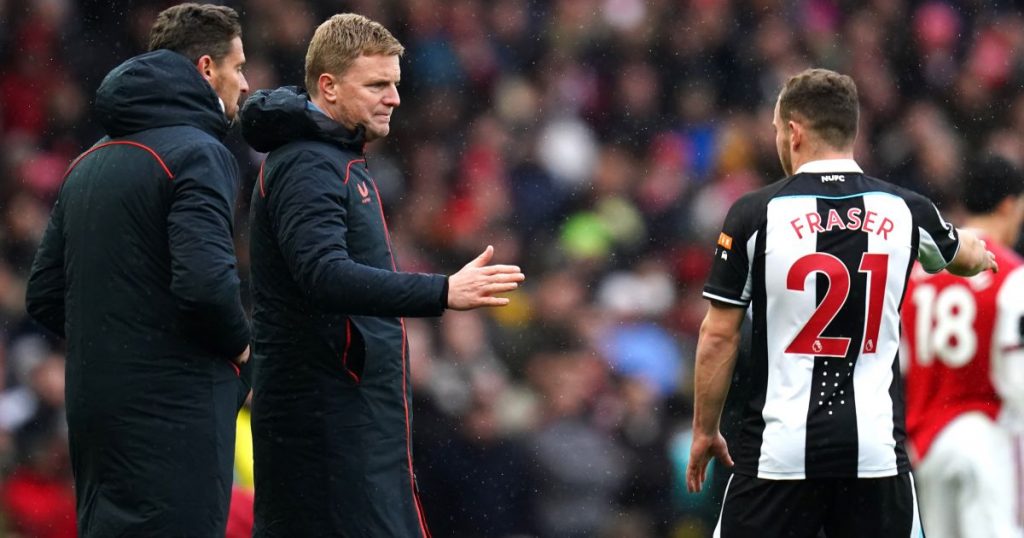 Eddie Howe is determined to pull Newcastle United out of the mire and feels a rejuvenated Joelinton can be a massive player in the fight against relegation.

Howe, 44, has been charged with the task of salvaging the Magpies campaign after replacing Steve Bruce at the helm. He inherited a side devoid of confidence and without a Premier League win in 2021-2022. That remains the case as the Tynesiders sit bottom of the standings with seven draws to their name this term.

Having come through Covid isolation, Howe is now fully in charge of the side and will hope to get that elusive first victory on Saturday. Fellow strugglers Burnley are the visitors to St James’ Park.

Newcastle have drawn three of their past four games. And they earned a point from a 1-1 draw with Norwich City on Tuesday evening.

Joelinton looked lively throughout and has cut a much happier figure since Howe took charge. And, having slightly altered the Brazilian’s position, the manager now feels the much-maligned forward will finally show his true colours.

“For me, Joelinton can be whatever he wants to be,” he said in Friday’s press conference, via The Chronicle. “He’s one of those players that can play a number of areas on the pitch. I wouldn’t probably label him at this moment.

“He’s got very high technical level, he’s got a great work ethic. He’s got a great physicality and I think he does have the ability also to score goals, so that mixed together and we’ve got an outstanding individual that will only get better.

“I’m really looking forward to working with him, I wouldn’t swap him. He’s going to be a valuable member of our team.”

Newcastle have become the fourth team in Premier League history to fail to win any of their first 14 top-flight games. The other three – Swindon, Queens Park Rangers and Sheffield United – were relegated.

Things are looking bleak for the men in black and white although the January transfer window may aid their quest. Many players have been linked with a move to the north east but it is always tough to buy players mid season.

And Howe has made it clear he will continue to battle with the squad he has at his disposal.

“The players are desperate to get the first win of the season,” he added. “I’m really pleased with the group do far.

“My philosophy is strong. I have a clear vision of where I want to take the team. That will take time but I think we’ve seen a start.”

The long-suffering Toon Army were in full voice as their side picked up a point against the Canaries. Howe was delighted with the supporters’ response and hopes they can lift the players to defy history and beat the drop.

“They supported us in a moment where we really needed them. They really galvanised the team and I can’t thank them enough for what they did,” he continued.

“There’s a reason why it’s not been done before, because it’s incredibly tough. But why not be the first? That’s always been my mindset. Why not change history?”

The post Howe seeks Newcastle history with player who can be ‘whatever he wants’ appeared first on TEAMtalk.