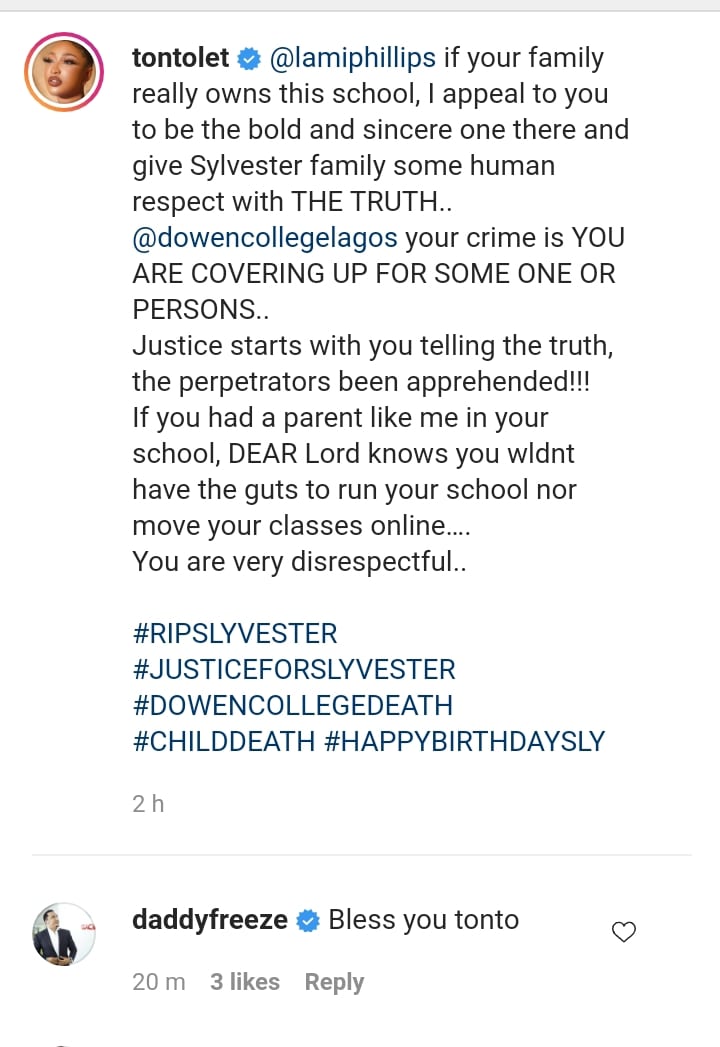 Popular Nollywood actress, Tonto Dikeh has called for the commemoration of Sylvester Oromoni’s 12th birthday at the premises of Dowen College in Lagos.

Naija News recalls that Oromoni was reported to have been beaten to death at a Lagos school for refusing to join a cult.

An uncle to the young boy, Perrie had taken to Twitter to disclose that his cousin until his death was a student of a college in Lagos State who was beaten to death by his peers.

Perrie said in a series of threads on Twitter that the school had told his family that the boy was injured while playing football but hospital diagnosis revealed that he sustained internal damages which resulted from the trauma his body endured while he was being beaten.

Subsequently, after a series of findings on the sad development which sparked agitations from Nigerians and celebrities, the Lagos State government ordered the shutting down of the school.

Taking to her Instagram page on Saturday (today) to lament the incident considering that the deceased was supposed to Mark his 12th birthday today, Tonto Dikeh wrote: “I woke up with so much pain. How do you lose a child in a safe zone and whose birthday is today? Sending love and light to Master Sylvester’s family and loved ones. Happy birthday young champ, we promise you justice.”

She added, “@dowencollegelagos, we will be leaving flowers and gifts outside your gate. Because today is a child’s birthday that died under your care!

“Please, if you are in Lagos, leave a little gift and prayer at the gate of Dowen College. Thanks.”

Addressing the school in another post, Tonto Dikeh said; “The crime was a horrible one but you have made it even more horrendous by lying to our faces or just plain ignorant of the affairs of your kids! Whichever way, we caught you and we need justice.”